SheBean found one of my weaknesses-shiny things. Apparently KidBean had a birfday a week before I came home and they had leftover whistles. Shiny, tasse-ly whistles. That make this neat sound when you bat at them. So yesterday SheBean came back from the store and announced she had a new toy. I was like, 'Meh, toy. Been there done that.', but oh no. It was a shiny tassle on a fishing pole. I tried to be calm. I held my ground firm. I was dignified.

For like .0123 seconds WOO HOO THAT THING ROCKS! IT GOES HERE THERE UP DOWN BOUNCEY BOUNCY SHINY SHINY!!1!

Erm. I liked it. SheBean also gave the treats I didn't like to the shelter I came from; they were happy to hear I liked my new home and said they were sure someone there would eat them. I just kinda wish nobody was still there to enjoy them, ya know?

Anyway, I discovered the fish tank today, time to watch a little catTV. And wait for SheBean to go to bed so I can keep her feet from floating away.
Posted by Monty Q. Kat at 8:40 PM 2 comments:

So SheBean took the KidBeans to 'the pet store', wherever that was. I decided to sleep in the little bed next to SheBean's bed while they were out. When they returned SheBean was all excited, and proceeded to show me all of the things they had bought for me. There was a big furry mousie, a feather toy, som type of wetfud with garden greens and two types of cat treats-one of them being freeze dried shrimp, and a new collar.

I liked the collar. The rest, not so much. SheBean can't decide whether I'm just picky or trying to drive her crazy. (She said that after spotting me play with an empty toilet paper tube.) Oh! She did get me some catgrass that I took a few bites of, so the trip wasn't a total waste. And some new dry food that I really liked, with lamb and rice.

Anybody want three bags of treats? They're opened, but only one treat taken out of each.

--SheBean here; I don't think I've ever had a cat who just didn't like treats. Or catnip, to be honest. Any thoughts?
Posted by Monty Q. Kat at 8:02 AM 2 comments:

Thanks to evfurryone who's stopped by to say hello, SheBean says you're welcome to teleport over anytime. I'll get evfurryone's links up, but I'm still getting the hang of blogging.

Yesterday was my first full day with my Beans; I tried to keep notes on their actions but I kept getting shooed off the kitchen table. It was the best place for observations, but something about 'backsides where food go' and the like. SheBean said it would be if the KidBean sat in my crunchy food. I get it now.

SheBean says she's going to email my Foster Mom and ask what my old routine was, I was all up and dancing at 6am today but I couldn't tell them what I needed. But it was kinda funny to make SheBean go through the motions. 'Fresh food? Water? Wet food? Litter? Milk? World Peace? World DOMINATION? WHAT???' Heh heh heh. She wants me to be happy here, but I already am!

SheBean says if the roads are good then she and the SmallBeans will go run errands. Do roads act up? I really want to go out and see but SheBean says she'd worry too much. KidBean wants to get me a toy today too, somethin about treats too. HeBean offered me some already, but I wasn't thrilled. Same with catnip.
Posted by Monty Q. Kat at 7:18 AM 4 comments:

I had a nice night with my new Beans, SheBean said I wore out KidBean so much he conked out for bedtime. (Is that a good thing?) I spent the night on their bed, curled up against the HeBean once he got offline and went upstairs. SheBean thought that was funny as he likes dogs more; but she also caught a glimspe of HeBean giving me some headrubbins too.

The rules are pretty easy here, so far there haven't been any misunderstandings. I know where my food and water are, when the can is, (complete with nice wheat litter!), and SheBean wants to get me some toys today when they exchange my cat carrier. The one they bought to bring me home was cracked and they didn't notice until it was time to bring me here. So the shelter people let me borrow one for the ride home.

SheBean thinks I'd been waiting a long time to find a furrever home; when they said they wanted me to come with them everyone at the shelter got really excited. One of them was on the phone telling someone: "Guess who's going home today?!? Monkey!" (More on that in a second...) SheBean can't figure out why I wasn't already adopted, she just guesses we were waiting for each other.

But yeah, I was called Monkey before, but the KidBean's nickname is Monkey as well. SheBean asked if Monty was alright and I liked it. It was close enough to Monkey but had a nice distinquished sound to it. I've been coming to it when SheBean calls, so it's a keeper.

And, um, I got the BabyBean to warm up to me this morning, which is a good thing. SheBean just wishes I could have waited until the sun came up.

--SheBean here; Monty and BabyBean became friends this morning at 4:30a.m., after he tried to slip in next to her for a cuddle and wound up waking her up instead. She's 10 months and 27 pounds, so to be honest, I was more concerned about her doing something to him!


Here's me and my new KidBean to show you how big I am, he's four years old: 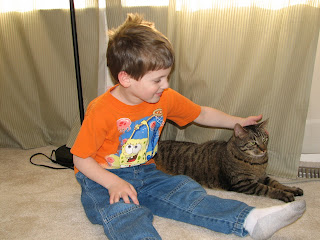 Now that I've been about the house

I think I'm going to like it here. I've got lots of rooms to explore, fresh food and water in a spot just for me (and away from the Baby Bean), and so many sunspots to lay in. After the Large Beans put the smaller ones to bed, I asked if I could sleep on a bed, to which SheBean replied: "Of course, this is your home now. Go get comfy, big man."

Oh yeah. I think she has had previous feline scratching training-she rubbed my ears in just the right way that I let out my first purr. To be honest I think that made her evening. She picked me up and gave me some serious catlovin.

I've got to go for now, SheBean is going to sleep and wants me to check on KidBean before crashing for the night. Not even here 24 hours and I have things to do.
Posted by Monty Q. Kat at 10:06 PM 4 comments:

Where the hell am I? 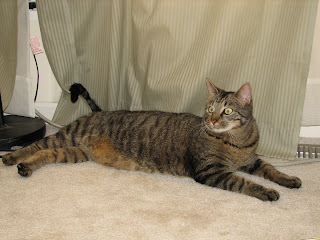 Hello?
I was just adopted and brought to my furever home. I'm going to go check the place out for a bit; in the meantime here is a picture the SheBean took of me.
Posted by Monty Q. Kat at 5:16 PM No comments: