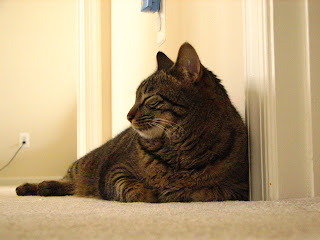 What's so funny, ThunderBum?
So a while ago I was trying to start up a once-a-week thing where I could tell everyone about any freebies I found.I want to get that going again. (If you know of any let me know for upcoming posts!) I'm gonna call it the Saturday Sample.
This week's sample comes from Halo Pet Foods, and it's for a $5 coupon. That gets you a couple o' cans of the gooshyfud, (if you're into that stuff), or a chunk off of a bag o' dry. I signed up for it and I'll give you a review of the food once MomBean gets the coupon.
...and her butt to the store. She wants to go plant stuff outside again and then sew. Beans.
Posted by Monty Q. Kat at 7:41 AM 10 comments: 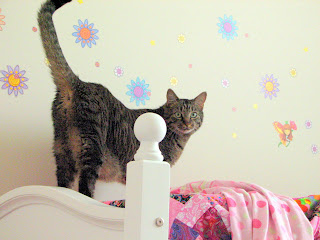 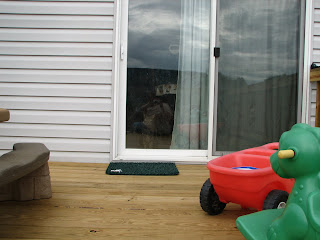 Did you forget something?!? 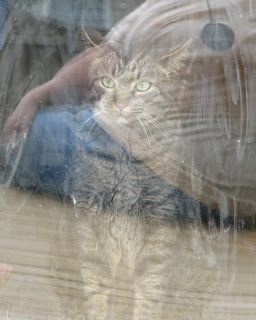 Labels: Hello let me out too, Ticked Tabby Thursday

Why Thank You! Wednesday

I got an award! Pawsome! It's from the super cool pair of mancats Eric and Flynn:

Here are the rules attached to this award:

Come back to BLoGGiSTa iNFo CoRNeR (PLEASE DO NOT CHANGE THIS LINK) at http://bloggistame.blogspot.com and leave the URL of your Post in order for you/your Blog to be added to the Master List.

Link the person who tagged you.

Copy the image above, the rules and the questionnaire in this post.

Post this in one or all of your blogs.

Recruit at least seven (7) friends on your Blog Roll by sharing this with them.

The person who tagged you: Eric and Flynn 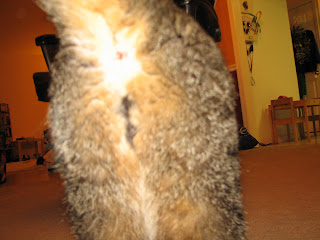 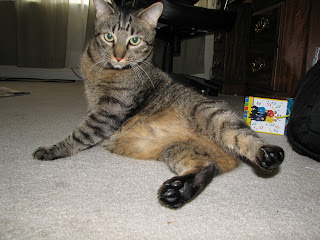 Labels: I laughed so hard I snorted, MOL, Videos 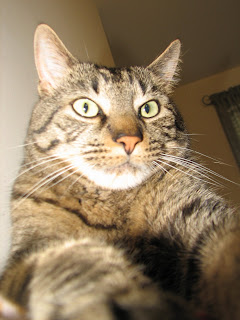 So, the storm story. Since I am the awesome tabbycat, I've been demandig to be let out of the front door these days, instead of hanging in the back with the slobberhound. MomBean decided that it's fine, as the usual routine is she lets me out into the fenced in back yard, and then opens the front door an hour later to let me back in.
Neat trick, huh?
Anyway, one day while Grandbean was visiting I had sauntered out for a stroll of my turf. Apparently I was forgotten about until the sky OPENED UP AND DUMPED MASSIVE AMOUNTS OF WET ON ME. Then it started dropping rocks-icy rocks! on me to boot. MomBean finally let me inside after the flood ended so I could rest.
Ahem.
What?
Liar. You sauntered into the house like you didn't care and were bone dry. I called you 8534 times to get you to come in and you ignored me. Try again, Baconator.
...
I had a drop of moisture on my left 3rd whisker.
Posted by Monty Q. Kat at 8:30 AM 11 comments: 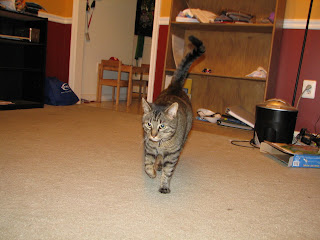 (I'm trying to do my best Angus strut. How am I doin', bro?)
Mombean finally broke down and asked HeBean to help with the Opera problem. (Opera the computer browser, not what I sing at 3am.) She was gettin' all kinds of hairballs with trying to send files, websites, etc., so we're trying out a new browser for the time being. Iron somethingorother. Meh. Whatev', as long as I can do my thing I don't much care.
Edit: From the Mancat himself, Mr. Angus Mhor!
"Strut, shout, put it out,
That's what he wants from women,
Come on, baby, whatchoo' takin' meh for?"
"Strut, shout, put it out,
all takin' and no givin,
Monty's put all the world on "Ignore"! 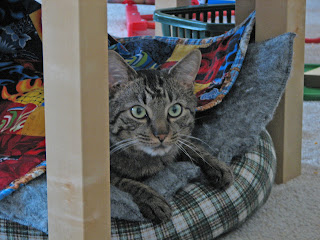 ...aaaand I'm back, GrandmaBean went home yesterday so I can finally get to blogging again. As soon as MomBean figures out why Opera suddenly doesn't like her. Let's leave it as 'technical difficulties' for now while she finishes her hissy fit over it.
It is pretty awesome to see her shake the monitor, though...
Posted by Monty Q. Kat at 9:09 AM 21 comments: 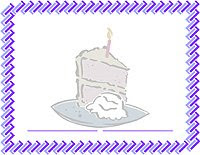 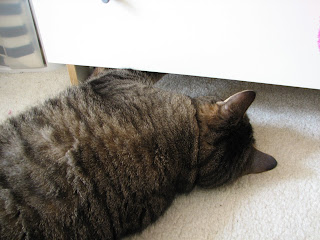 GrandmaBean is visiting, and they're going up to Baltymora for the weekend with the little beans. I've been told it's a 'man weekend' here at the house, but all that means is that I'm stuck here with HeBean and the slobberhound.

If you need me I'll be under the bed. As soon as I fish out my toy from under this dresser.

...and when a certian Woman gets back from her fun trip (that I'm being left behind!) she can tell you all about how a certian TabbyMan got stuck outside in a thunderstorm. And hail. 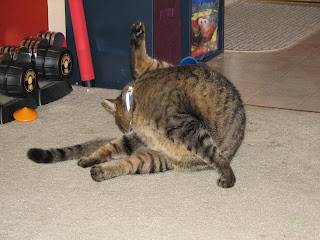 Check later, busy at the moment.

Be careful you don't sprain anything there, Baconator...