The winners of the Sock Kitties were the Taylor Catsssss, concats to you!
I'll bite MomBean to mail the kitties out this week for you, she even has a box already. (For once.)

Did you see what The Most Awesome TuxieGirl EVER was working on this week?

FOR A CERTIAN STUDLY MANCAT?!? 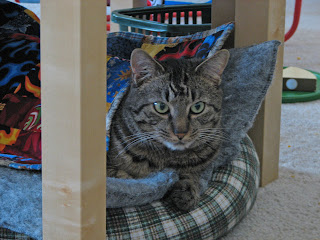 Oh yes, it's good to be the mancat. I just need to take a little rest though...she is still a knockout, belly or not. 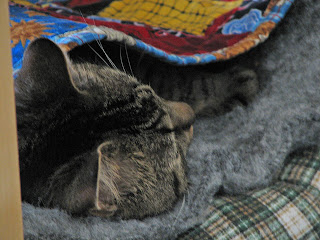 ...besides, I've got some work to do for this weekend, something cool is coming up again!

Alright sweet tuxie girl, I know you have something going on at your blog. Everytime I've been goin' over to visit I get all dizzy and the room gets hot and next thing I know SweetBean is fanning me down on the couch. 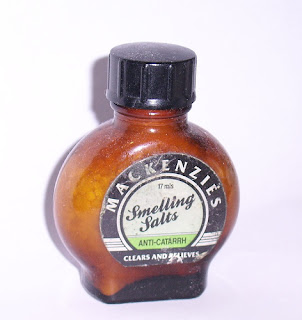 Today I will learn the secret! I will finally figure out what you have going on over there-not even Roxy or Lucky will spill any of the beans. And their Mom knows karate! Today I'm going to finally see... 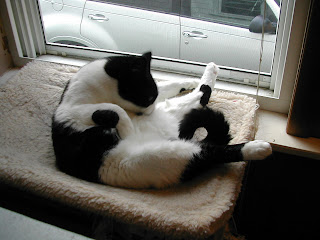 is it hot again?

Labels: Millie sends me to the icebox a lot, Milliebaby, Secrets, Smelling salts 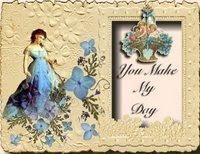 Angus, one awesomely cool mancat gave me this, and I'm touched. Not pincushion touched like he was, poor guy. I'm gonna quote him to say: "Now, it's the thing to pass an award on, to honor or recognize another feline who inspires similar sentiments in your own heart. Do you know who makes my day? Man, there are soooo many, it's hard to name just a few. I will put down a few, in no particular order:"

Still not speaking to you, Woman! 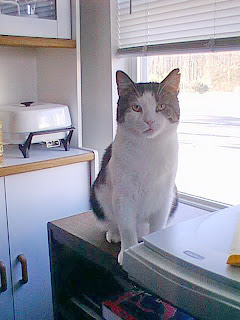 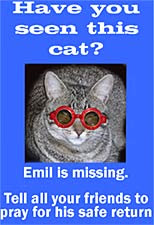 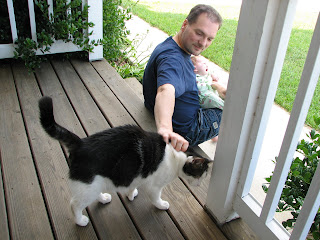 Seeing how Monty has taken to the fainiting couch, I'll explain everything tommorrow. 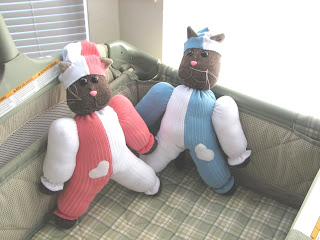 We're auctioning these two clown sock kitties to raise money for Lilly Liu and Mu Shue's Mum.
(And if it comes to it, Eric too if his vet bills get big.)

They are larger than MomBean's usual sock kitties,
so we're using Sprout to show the length and size.
(Sprout didn't like being woken up by accident,
she isn't commenting on the kitties.) 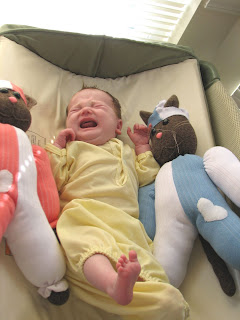 They are up for auction seperately, and it'll run until June 29th.
Leave your bids in the comments, forgot about that part!
Please spread the word and I hope you like them! 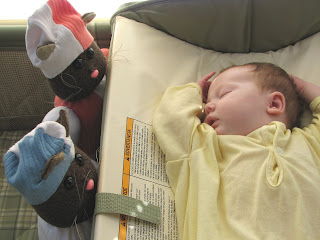 ...and now I have to hide them from SweetBean. Again. She really likes them...

p.s. I'll have MomBean get some better close-up pics of them,
you can't see the face detail very well. :P

I don't even know where to start when it comes to that cat. I thought he was some random dude that needed a quick bite or somethin', even though he's as broad as a friggin' barn and MomBean was being nice. 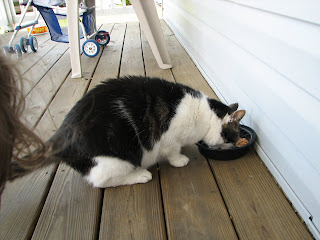 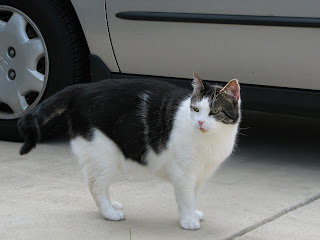 She knows this cat. Known him for years! And do you know why?!? 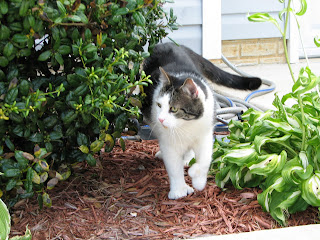 HE USED TO BE HER CAT. AS IN USED TO LIVE HERE BEFORE ME. IN MY HOUSE.

I can't...it's too much to bear. I need to go lay down before finishing the story. 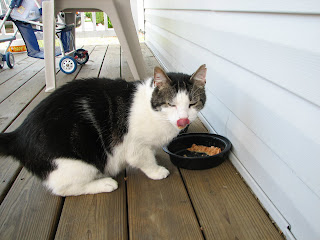 Who you callin' fat, chub-boy?

Labels: Dude Newman, MomBean has some explaining to do, Other cats, WTH

There's a story about the cat from yesterday, and more pics.
MomBean has some explaining to do....

Until then, here is a pic of MomBean's 13 tomato plant madness patch: 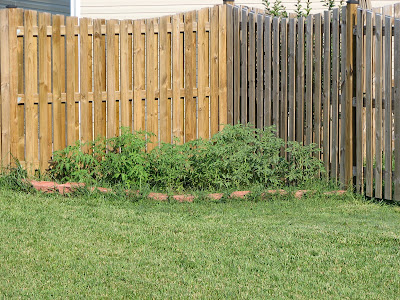 She started them from seeds and didn't intend to have so many going. She figured half of the seeds wouldn't grow, then she thought half of the seedlings wouldn't survive the transplant into the little 'holding' pots, and then she knew half would die when they hit the garden.

Uh-huh. I'm going to be 'tocks deep in tomatoes soon.

White ones, pink ones and red ones. Bleh! 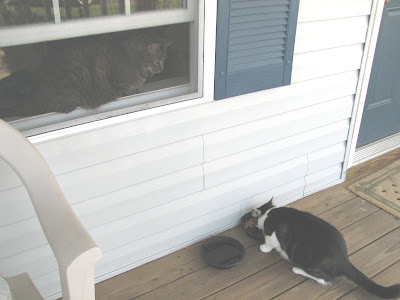 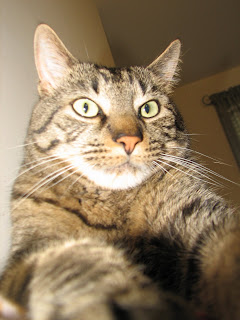 I know, I know. I forgot that your birthday was June 6th and you are now a handsome 2 year old mancat. Can you forgive me?

Only if I can say that you turned 35 today.

WHEN I CATCH YOU I'M GOING TO SHAVE YOU BALD!!! 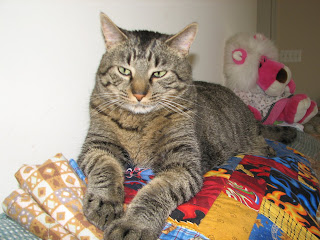 Please forgive me, I hadn't written it on the calendar, that's all.

Um, to be fair I don't have a calendar for this year, so nothing is written down...

HOW COULD YOU HAVE FORGOTTEN???

Labels: How could you forget, Mancat, Mancat denied, Mancat Monday 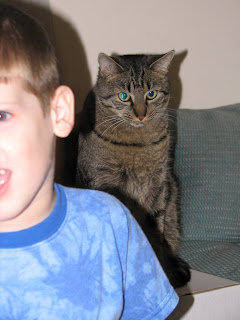 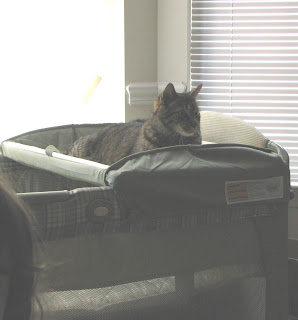 Labels: Kitty in a bed, What 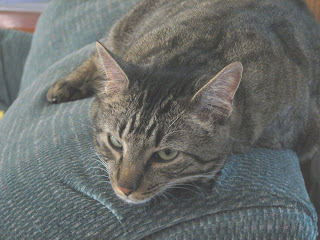 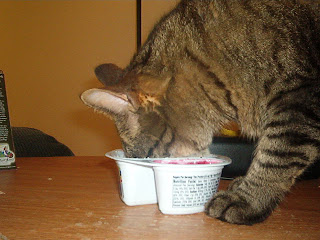 Monty, why is 'box o berrokoli' written on the shoping list? 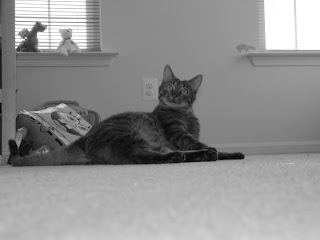 
Uh-huh. And what about tryin to sway a certian tuxie's cousin into revealing information? 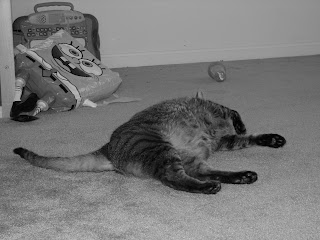 
Yeah. You feel like spilling the beans on who blew chunks on my rug? 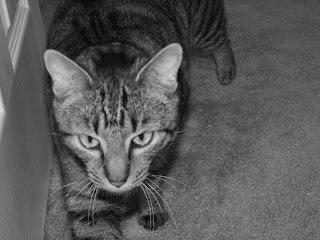