My sweete tuxie girl Millie (who, I think is short for Magnificent!) tagged me for a meme to learn how I got my name. I can't say no to her. :)
When MomBean adopted me my name was Monkey, but that's KidBean's nickname. MomBean wasn't sure that she wanted to re-name me, but didn't want to make a big change to it. (She thought I wouldn't reply to a really different name, like Senior Lardbutt von Bunnykicker.) On the way home I decided to sing some opera to pass the time and MomBean thought I was getting upset, so she kept thinkin' of names.
My KidBean loves Thomas the Tank Engine. I mean, loves it more than Mini
loves her Nip Ravioli's. For some reason she rembered a poem from one of his books about an engine called Duck that went: "...but his real name was Monteque." Monty/Monkey sounded pretty close, and she even asked me if she could change it when we got to my new home. I didn't care, so it stuck. And that's why I'm called Monty Q. It's actually Monteque, but that's really fussy. (And HeBean said NO WAY.)
I'm still iffy about ducks, though... 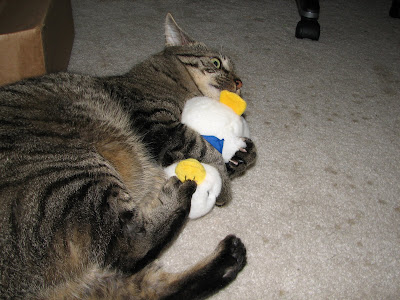 I am going to tag three cats. They will have to tell the story of how they got their names, and then tag three other cats. You should announce which cats you are tagging in your blog, and then let them know by commenting in their blogs.

1. Skeezix ('cause MomBean loves his name)

That is a really interesting story about how you got your name. I bet you love your name, to me it has a very artistocratic sound to it.

You have a very nice name and its cool to learn the origins!

That is really interesting how to gots your name Monty. Good work on bunny kicking that duck!

Very cool story as to how you acquired your name, Monty. :) MontyQ is a very cool name. :)

Monty, what a great story about how you got your name!

IS THAT THE AFFLAK DUK? CUZ WE HAVE ONE OF THOZE AND WIN YOO SQWEEZE IT OR BUNNYKIK IT IT GOZE "AFFLAK" LIKE IN THE COMMERSHULS ON THAT BOX IN THE KICHEN WITH THE MOOVEYS ON IT AND I LOVE TO BUNNYKIK IT AND WIN I DO I LOOK JUST LIKE THIS PIKCHER OR MAYBEY YOO TOOK A PIKCHER OF ME BUNNYKIKKING THE AFFLAK DUK WIN I WUZN'T LOOKING????

What an interesting story about your name.

I think Monty is a great name. We Mancats need names that sound masculine!

That's a funny story dude! Monteque is awfully stuffy. It's like my "British" name, Sir Peachley, which I use when I need to be stuffy.

That is a very interesting story. You know, i thought after your contest that your name must have come from the film! But then, you invented the full Monty so of course that isn't right! x

You have a great name, Monty. Q is a very sophisticated middle name.
Your buddy, Jimmy Joe

Oh yeah, Monty Q is so much more manly and, well, yoo than Monkey. Tho we do kinda like Senior Lardbutt von Bunnykicker...

That is a great story Monty Q. I expecially liked the part about you singing opera. Nice to see culture. I do like the name Monty Q or even Monteque.
Roxy

I think that you have a really neat name.

That is very interesting story about your name indeed~!

Thanks for tagging me~!
I will write it right away~!

Thanks to Millie for this Meme, we really love learning how other cats got their names. Boybean was right Monty Q is way cooler than Monteque.
Your FL furiends,

Monty, that is a wonderful story about how you got your name! We are all monkeys are heart anyway. Great meme!
Purrs,
Mr. Chen & Ollie

I know more than I ever wanted to about Thomas the Tank Engine! I think my boy has every tape! I remember that episode. So THAT's how you came to be Monty Q. I knew it sounded good.

Oh, I like how you got your name. It's very manlycat.