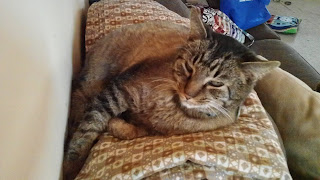 Busy, to say the least, can't you tell?

It's been busier than a bunneh in a strawberry patch, but things have settled for the time being. Here's the 'quick' rundown, mostly in order: (starting from about 6-7 weeks ago)

Now if you need me, I'll be getting back to that nap...

Labels: isn't supposed to be mancat monday, my beans

Oh shingles in the eye is not so good. Our human had that but fortunately the day it showed up the doctor recognized it!

Ahhh the Woman has eyeroid issues too and I'm so tired of the whining about what it does to her flubber. But at least she's waaaaay to old to start hatching another sticky person...

.... your poor mom -- being sick sucks, being sick with a bun in the oven is just terrible. Poor mom, your poor mom, my mom would be BEYOND stressed she would be in the local loonybin. I am glad your house is fixed, I hope the insurance company paid for most of it.
Bonks to all of you, take good care of every bean Mr Monty -- it is your job.

Memories of Eric and Flynn said...

Concats to your mum for her Halloween babybean. We hope she is soon feeling much better.
We are glad no-one got hurt by the lightning and glad the house is fixed now.

Nap while you can, Monty. Things are gonna get even more hectick than they already are.

Ewww to all of the bad stuff but YIPPPPEEE to the arrival of a new Bean!!

The Florida Furkids and Angel Sniffie

Oh Monty! You know you can teleport over here any time if you need a quiet spot to nap! I am so happy everybody else knows about your BIG secret!

That is alot of going ons. We hope your mom is better. You must be vewy tired after that. Happy napping.

WOW! That is a lot happening to your Mom and family. We have missed you! Congratulations on the new baby bean!

There has been a LOT going on at your house, Monty! At least the part about the coming human kitten is good, even if most of the rest of it has been pretty un-good. I hope the human vets get a handle on all your human's ills so she is in much better shape for the baby's arrival!

Monty - wow, what a lot has been going on over at your house. We hope your mombean starts to feel healthier again soon. We are excited about the new blurp. Purrs that the rest of the time goes by quickly and without any more health or home crises.

So, a typical boring week at hme? No Srsly. we are sending purrs yer way with all THAT!!!

OMC! Such a lot happening! We hope yoor mombean is feeling tons better, and we're glad the house is fixed up. What a shock that must have been!
And a noo baby is always great noos. Congratulations.

Ooooh, congratulations! For the last item, not the rest.

We're sorry those bad things happened. The broken gas line really sounds scary! But shingles in the eyes? We are sending lots of purrs and wags for your mom.

Alasandra, The Cats and Dogs said...

shingles is so not good, we are purring that you Mom gets well soon and feels lots better.

congrats on the new bean.

Your poor mom Monty we hope you have been purring to her lots to make her feel a little better. How great you'll be getting a new little sticky bean in the autumn.
Luv Hannah and Lucy xx xx

Gosh, we sure hope all the bad stuff is over with and you can enjoy the new little one coming soon.

Wow, mom saw some of this on facebook, but sheesh, that is quite a list. We hope everyone is doing well (or better). Tell your mom that PlusOne is eating mom out of house and home, so three boys is going to be fun, hahahahaha

Wowwie, zowwie, things has been very exciting around your place, no wonder yous needs a nap!
Kisses
Nellie

Teri and her Stylish Cats said...

Good thing your mom has a good vet. A friend of ours got shingles in her eye and ear and it had multiple ramifications including a stroke. It is very serious in adults. Teri keeps sayin she needs to get the vaccine...

Congrats on the upcoming bebbeh bean! We just read the news on Millie's blog!

You have a lot of news to share! You will have a new baby bean to train, so rest up now! Our dadbean had da shingles, nasty stuff!